There are many basic items of daily life which are used all over the world and are quite basic item in everyone life. Fountain pens are used by everyone in the world which is used for several purposes like in studies and for conducting some business work as well. Fountain pens are available in different prices among which some normal ones are very cheap while some luxurious pens which are equipped with expensive materials are listed as the most expensive ones in the world. But the main purpose of pens is to write which can be written from cheap and expensive ones as well. Most of the people wanted to own expensive pens to maintain their status and their luxurious lifestyle among the people. These expensive pens are also considered as the best option for giving someone as gifts. These expensive pens are not only luxurious but beautiful as well which are worth purchasing due to their attractive looks.
The following are top 10 most luxurious pens in the world:

Tebaldi fountain pens are considered as the landmark in the history of Bentley which is famous luxurious automobile industry and this pen is also their creation. It is enclosure which is basically two tones and is made from pure 18 carat yellow gold while its nib is covered of ruthenium and rhodium. It comes with the same finish which was seen in their traditional models of cars. It was made in a very limited edition that only 40 fountain pens of this model were introduced in the market. The price of this fountain product is $43,000. 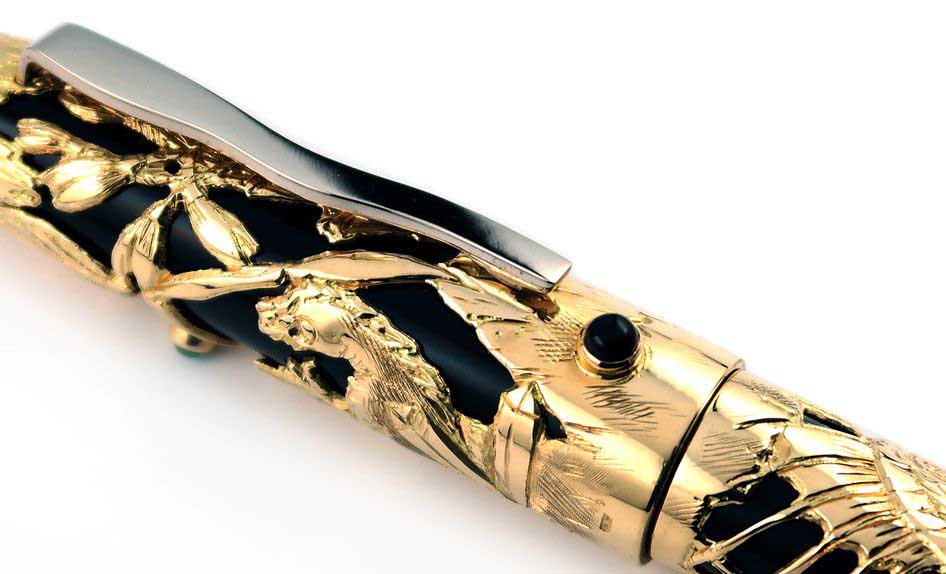 Gala High luxury pens is the one which is made of inspiration from the earth and on its theme. It was made with the expensive material like yellow and white 18 carat gold, crystal rock, hematite and many other items. It was designed for the celebration of Jules Verne’s futuristic vision in the world. It comes in dark grey color according to the interior of the earth. The price of this product is $43,000. It was developed with the blended theme of wonder and fears especially this model which was customized according to some special theme and purpose.

Marte Omas are a custom made pens for the specific person. It offers not only fountain pen but also roller ball pens and many other pens as well. It is made up of gold and is a map of Mars. This beautiful product features different natural beauties like mountains, deserts, etc., It is further equipped with the precious rubies to enhance its look and make it more beautiful. The cap of this enclosure is made of diamonds which makes it more expensive. Only 30 pens of this model were made by the company which were purchased by the rich people or writing conscious people in the world. The price of this product is $43,000. 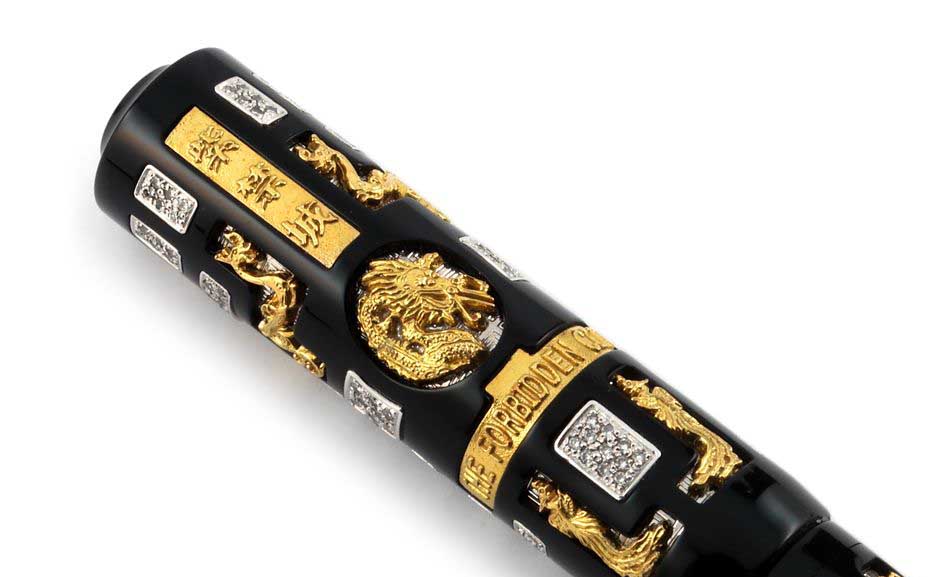 Visconti is the true symbol of luxury and style as well. It is very beautiful and creative pen in the world. It is made with very limited edition and is studded with the 18K gold and diamonds on it which increased its price. It also has inner ink filler system which made it easy for the user of people. The price of this beautiful product is $50,500. The design of this enclosure is very different and attractive as well.

This model of a pen by Visconti is very beautiful and luxurious as well. This fine pen has two nibs and has internal ink reservoir for the fillers of ink. It is equipped with precious metals like gold and silver as well. The nibs of this enclosure are made of 18K gold and provide different styles of writing as well. The design of this product is very rich and classic. It is further decorated with the diamonds and rubies. Its cap is also very attractive which is made of gold and silver to give it complete luxurious touch. The price of this product is almost $57,000. 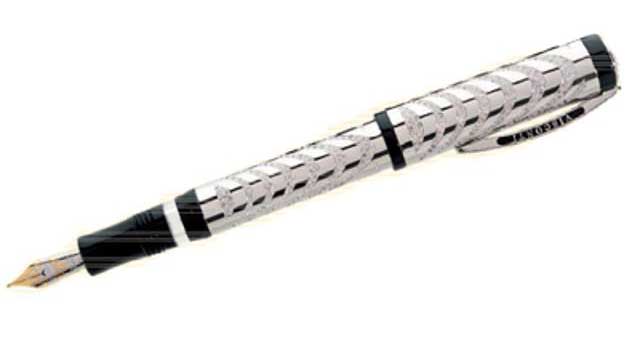 Visconti Ripple is very beautiful and luxurious pen in the whole world. It is very limited edition pen with a limited  number of pens. It is equipped with the 18K gold and diamonds on it. It is basically two tone pen with 18K nib as well.  The price of this pen is almost $57,000. In this pen the reservoir for the ink fillers is double for the convenience of  the people. It was sold in two main colors in black and gold as well. 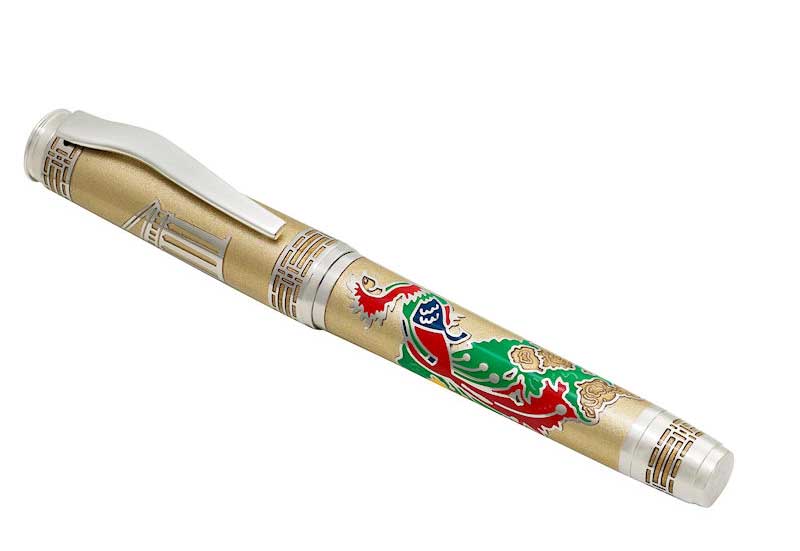 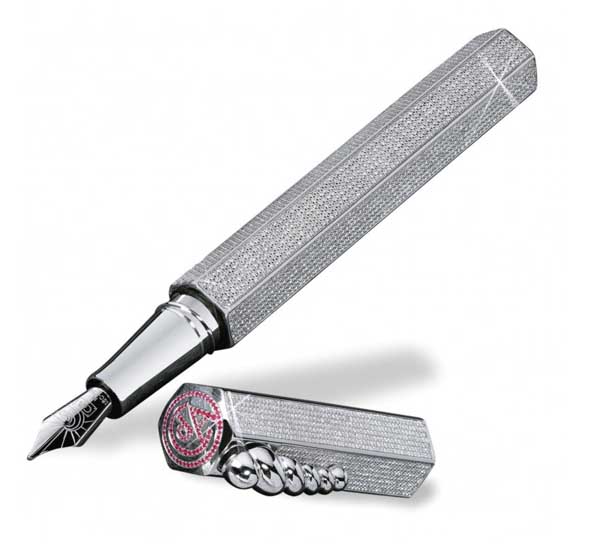 This luxurious pen is made b the famous Swiss company called Caran dAche in about 1999. This beautiful pen was sold in Harrods for high price tag of $265,000 which was also listed as the Guinness World record as most expensive pen in the world in 2001. It is made of expensive material and further coated with silver. The nib of this pen is made of 18 K gold and also equipped with diamonds and rubies on it. It was made by the famous jewelry maker called Robert Perron.

This pen was made by two famous brands Mont Blanc and Van Cleef, who collaborated only to make this luxurious pen. It was made in limited edition. It was in three editions which have some different specialties like rubies, emeralds and  sapphires as well. All these precious materials have increased the design and price of this pen. The price of this pen is almost $730,000. 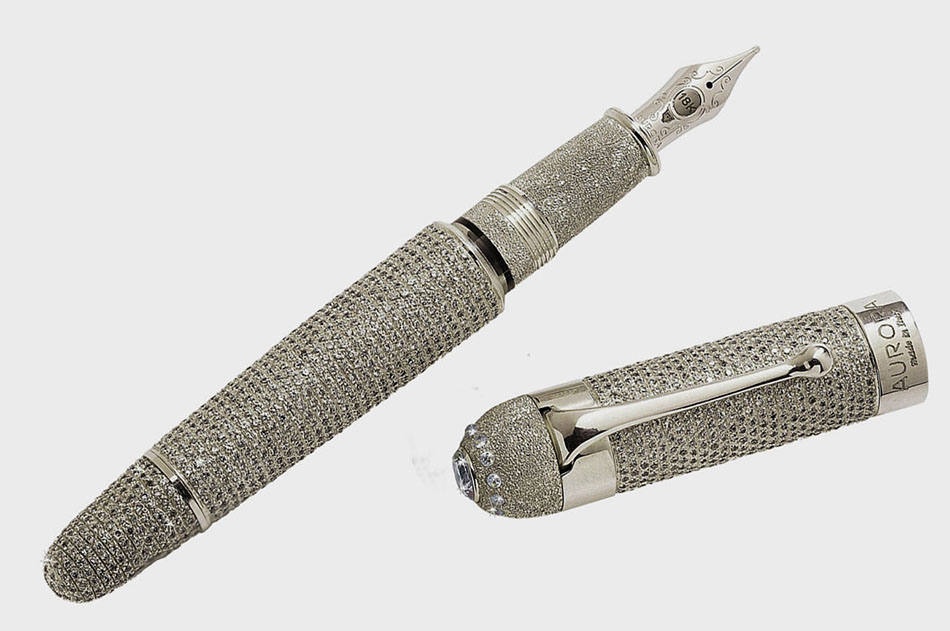 Aurora Diamante is considered as the most expensive and best writing instrument in the world. It is very limited and only sells one pen in the world. It has 30K diamonds on it which increased its price. It is a two tone pen and its nib is made of 18 K gold and is best for keeping in a coat. The price of this most expensive pen is $1,470,600.

We conclude that pens are used by everyone in this world. There are many brands which are making pens in the world among which some are very cheap while some of them are very expensive. All these pens discussed above are very luxurious and the  most expensive as well. All of them are equipped with diamonds and gold which raised the prices of these pens. These pens are only affordable for the rich people not everyone.